Disclaimer: I’m a marketer. This post is for informational purposes only and should not be considered financial advice. Consult a financial expert before making any major financial decisions.

I’m probably a late majority, if not laggard – with cryptocurrency.

About 3 years ago, a friend told me about Bitcoin and the blockchain. Interesting concept, I thought.

Then came the mining craze, where people were buying and selling mining rigs, using powerful computers and graphic cards to solve computational problems in hopes to be rewarded with Bitcoins.

But when my friend asked me to put money into it, I said no. My reasoning was that I’ll never invest in something that I don’t understand.

What made me invest?

The first prompt came about when I was purchasing an SSL certificate on SSLS.com, for one of my websites. Upon adding items in my basket and landing on the checkout page, I saw a button ‘Pay with Bitcoin’. 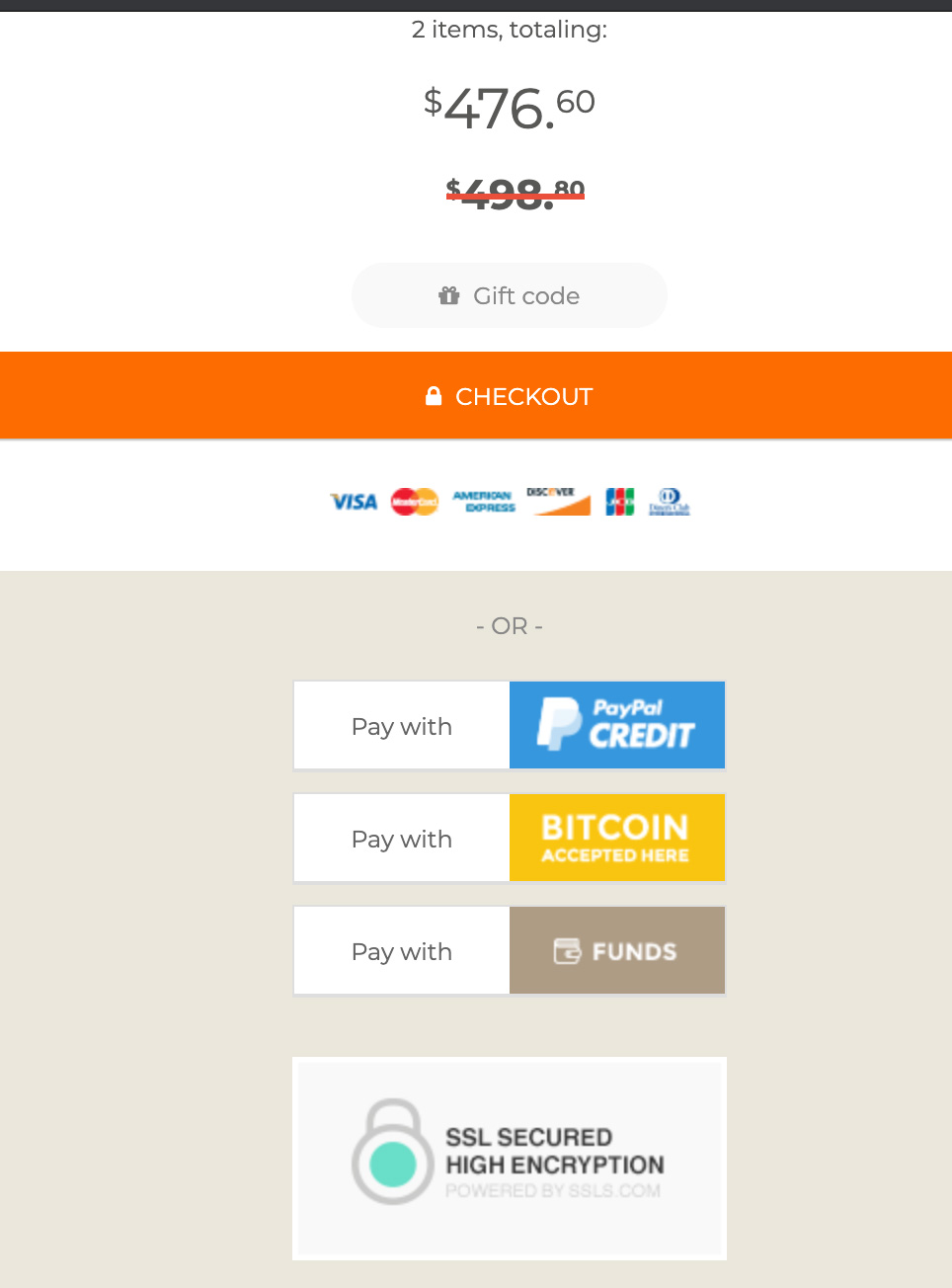 I knew some companies were already accepting Bitcoin as payments, but those were companies that I don’t buy from.

But now, a website that I purchased a few times from, accepting Bitcoins?

This is getting real.

Then Paypal, which I use a lot, launched a service (for the U.S.) for users to buy, hold and sell cryptocurrencies.

It hit me that cryptocurrencies were becoming a real thing. And if it’s being adopted by companies and people around the world – then it makes sense to have some of them.

And it’s extremely volatile – due to market sentiment.

This element of trust and money is of course more complicated. (A thought-provoking book to understand more about debt and money is Debt: The First 5000 Years by David Graeber)

So, the reason why cryptocurrencies are worth going into is because of the adoption rate.

That said, I wouldn’t sell my car and wedding ring to dump it all into cryptocurrency. It’s still risky. For me, I’m comfortable putting approx. 5-10% of my income into it, so that even if everything crashes and my digital currencies added up can’t even buy a plate of rice – I’ll still be fine.

The two biggest digital currencies are Bitcoin and Ether. Ether (ETH), is the digital currency of the Ethereum network, the second most popular digital token after Bitcoin.

Both the digital currencies are similar in few ways. They are decentralized (not issued by a central bank), use the blockchain, traded via online exchanges, and stored using cryptocurrency wallets.

But they have some differences as well.

For example, Bitcoin has a supply limit of only 21 million coins for an anti-inflationary purpose, making it a scarce currency. That’s why people refer to Bitcoin as Gold.

Ethereum on the other hand was first intended as a platform not just to maintain a decentralized payment network, but also to store computer code – that can be used to facilitate decentralized financial contracts and applications, using its own currency, Ether (ETH).

Well, which should you invest in?

I’m probably not the best person to answer this, but here’s my personal thought.

Bitcoin is a good store-of-value, because it’s adopted by many people, thanks to its first-mover advantage.

Ethereum was created with a purpose as a technology to power applications, beyond just being a digital currency. This has powered platforms like OpenSea, a marketplace for digital artworks and digital collectibles that transact using Ether – which makes Ethereum a worthy technology to invest in.

So for me – 65% of the money I put into cryptocurrencies goes into Ethereum and the other 35% goes into Bitcoin.

Note: I’ll save NFTs as a discussion for another day. For now, I’m not a fan of NFTs yet.

How to invest in cryptocurrencies?

If you’re starting out, I recommend starting with an exchange like Luno.

I found that it was simple to learn, compared to an exchange like Binance (which could be complicated even for seasoned investors.)

There are only 5 cryptocurrencies on Luno, it gives you a clean interface and the guides/tutorials that the team creates are extremely insightful.

Just like learning to ride a bicycle, the best way to learn about digital currencies is to stop being a bystander and dip your toes into the water.

An investing tip for beginners.

I don’t recommend throwing huge sums of money into cryptocurrency (unless you can afford the loss).

For the beginner, the best way to start investing is to use a strategy called Dollar-Cost Averaging (DCA.) Instead of investing an upfront lump sum, say RM120,000 – you break them into say 12 months and invest in chunks of RM10,000 every month.

Take a look at the example below: 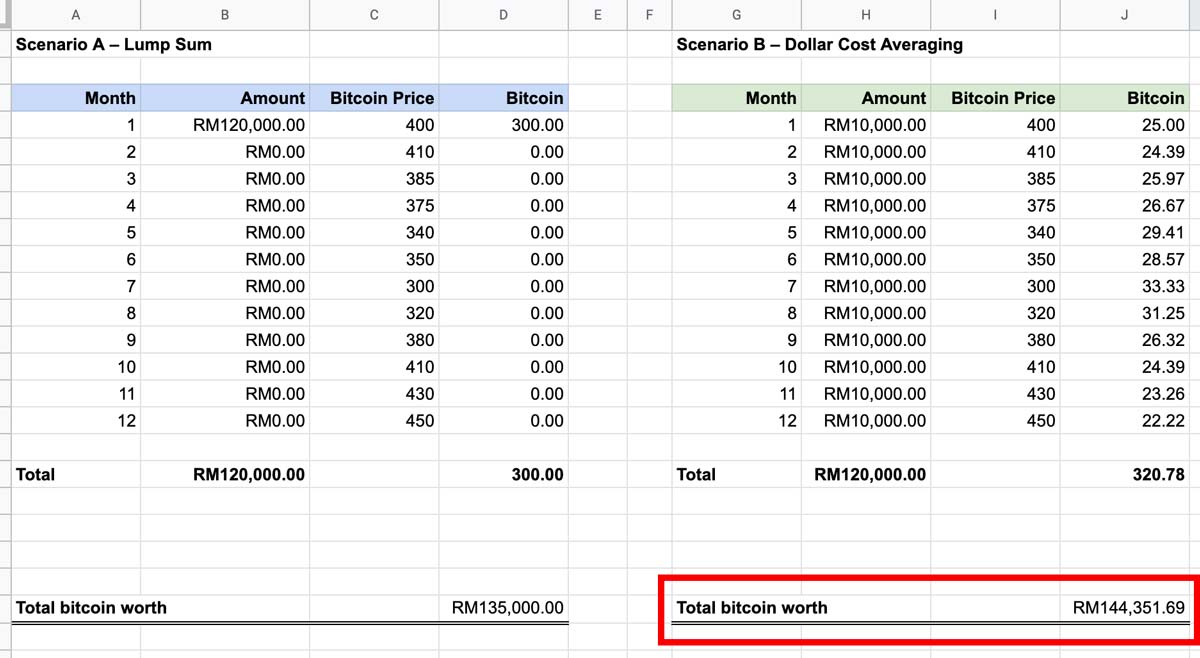 With a DCA strategy, there’s less stress about having to ‘time’ the market and enter during a dip. From my limited experience, DCA however, requires lots of discipline and patience – amidst the buzz on social media when markets are going up and down.

Some people strongly recommend the DCA strategy, and some are heavily against it. Again, do your own due diligence before making any financial decision.

Otherwise, I think it’s never a better time to buy some digital currencies and worry less about the right time to go in.

If you want to get started, click on this link (or enter my code: TCZGT8 ) to get started with Luno. We’ll both get RM25 in Bitcoin, so that’s a win!

I’ll leave you with a quote that resonated well with me when I first invested in cryptocurrencies.

“This belief we have that the future is knowable is crazy. People need to have the freedom to take more chances.” — Malcolm Gladwell

I’m not a professional trader or investor. Marketing is what I do in my workday. Drop me a comment with your thoughts or help correct me, if I made any mistakes in this post.